Hosting a baby shower comes with a long to-do list, including choosing the perfect theme, displaying the best decor and flowers, and showering the parents-to-be with a generous amount of love. Today, baby shower themes range from out-of-the-box rave-themed, like Rihanna and A$AP Rocky, to traditional blue and pink baby-themed. Rustic and boho themes are still increasingly popular, and gender-neutral baby shower themes continue to gain traction. With so much to think about, your friends here at Mancuso’s Florist are giving you a hand when it comes to baby shower themes and how to seamlessly pull them off with gorgeous flowers.

How to Make Your Baby Shower Theme Stand Out Hosting a boho baby shower means free spirits, happiness, and going with the flow. Patio decor, including branches with long strands of fresh flowers, macrame, dream catchers, white linen canopies, and balloon arches, are ideal elements to incorporate into this whimsical theme. Our favorite flowers in boho floral bouquets, among loose, airy greenery, are white blooms like roses, peonies, orchids, daisies, and pops of orange or peace from birds of paradise, stock flower, dahlias, and gerbera daisies. A thoughtful touch that incorporates flowers for the mom-to-be is presenting her with a boho floral crown to wear during the shower. 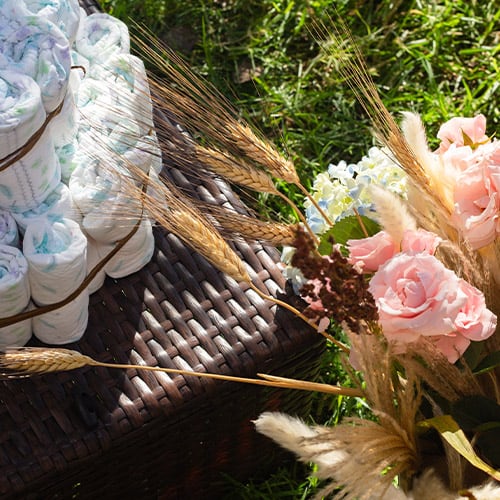 Baby Showers for a Boy

“Oh, boy!” When a baby boy is on his way, the go-to baby shower theme revolves around blue. Blue flowers like hydrangea, iris, hyacinths, and delphiniums are wonderful blooms to include in centerpieces and other table flower arrangements. Blue icing on cakes, cupcakes, donuts, and cookies will make guests gravitate towards to dessert table, especially if blueberry pies or blueberry muffins are included. Balloons are also a fun, childlike way to celebrate and shower the mom and dad. Spice things up with blue moons and star balloons that float overhead to make guests feel like they’re under the night sky. Baby Showers for a Girl

Pink is all the rage in the girl world! Aside from classic pink roses, peonies, carnations, and gerbera daisies, purple blooms like purple hydrangeas, anemones, gladioli, lavender, and orchids, are also stunning selections to incorporate in baby shower arrangements. The pink and purple color combination opens doors to baby shower themes like mermaid, butterfly, and ballet princess. With all things girly, tall dessert stands, paper lanterns, bows, and glitter are must-have decor items. Whether the expecting parents are waiting to reveal the gender of their baby, are having fraternal twins, or simply want to include both men and women in the shower, gender-neutral baby showers keep increasing in popularity. Some people believe that men should go to a baby shower; after all, fathers are parents, too! Some perfect gender-neutral baby shower themes include sunshine, rainbows, bumblebees, ducks, and teddy bears. Color palettes range from all the colors of the rainbow, to both pink and blue, or tans and whites to yellow and sage green. Gender-neutral flower arrangements for tables can include almost any bloom, especially roses, alstroemeria, daisies, freesia, hydrangea, orchids, lilies, snapdragons, and wax flowers.

Deciding on a beautiful and trendy baby shower theme might be easier than you think. Selecting colors and flowers will help lead you down the path to choosing the small details and comprehensive theme for the baby shower. When it’s time to purchase flowers and centerpieces, or gifts for the mom and dad, take a look at our collection of blooms here at Mancuso’s Florist . 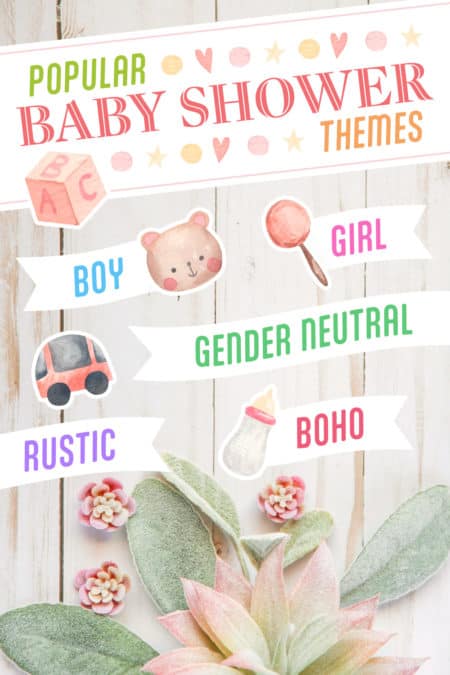